Finally, for those who were not here last week, I should mention again that I do not plan to convert over any monsters that are found in the Monster Manual, unless the difference between the Pathfinder and 5E versions are so markedly different that to do so would result in an imbalanced encounter. So, with those comments out of the way, let’s get to the critters!

Medium undead, neutral
Armor Class 15
Hit Points 97 (13d8 + 39)
Speed 0ft., fly 40 ft.
STR 7 (-2) DEX 13 (+1) CON 16 (+3) INT 10 (+0) WIS 12 (+1) CHA 17 (+3)
Skills: Arcana +3, Perception +4, Persuasion +6, Stealth +4
Damage Resistances acid, fire, lightning, thunder; bludgeoning, piercing, and slashing from nonmagical weapons that aren’t adamantine
Damage Immunities: cold, necrotic, poison
Condition Immunities: charmed, exhaustion, frightened, grappled, paralyzed, petrified, poisoned, prone, restrained
Senses darkvision 60ft., passive Perception 14
Languages: Common
Challenge 6 (2,300 XP)
Ethereal Sight. Aldronard can see 60 feet into the Ethereal Plane when he is on the Material Plane, and vice versa.
Incorporeal Movement. Aldronard can move through other creatures and objects as if they were difficult terrain. It takes 5 (1d10) force damage if it ends its turn inside an object.
Rejuvenation. When Aldronard is destroyed, his soul lingers. After 24 hours, his incorporeal body reforms. Aldronard is doomed to remain a ghost until either Justinia or her father Eredian forgives him – a forgiveness made much more complex, since both Justinia and Eredian have been dead for decades now.
ACTIONS
Multiattack. Aldronard makes two melee attacks.
Withering Touch. Melee Weapon Attack: +5 to hit, reach 5 ft., one target. Hit: 17 (4d6+3) necrotic damage.
Etherealness. Aldronard enters the Ethereal Plane from the Material Plane, or vice versa. He is visible on the Material Plane while he is in the Border Ethereal, and vice versa, yet he can’t affect or be affected by anything on the other plane.
Mournful Wail. Each non-undead creature within 60 feet of Aldronard that can hear him must succeed on a DC 14 Wisdom saving throw or be frightened for 1 minute. If the save fails by 5 or more, the target also ages 1d4 x 10 years. A frightened target can repeat the saving throw at the end of each of its turns, ending the frightened condition on itself on a success. If a target’s saving throw is successful or the effect ends for it, the target is immune to Aldronard’s Mournful Wail for the next 24 hours. The aging effect can be reversed with a greater restoration spell, but only within 24 hours of it occurring.
Possession (Recharge 6). One humanoid that Aldronard can see within 5 feet of him must succeed on a DC 14 Charisma saving throw or be possessed by Aldronard; Aldronard then disappears and the target is incapacitated and loses control of its body. Aldronard now controls the body but doesn’t deprive the target of awareness. Aldronard can’t be targeted by an attack, spell, or other effect, except ones that turn undead, and he retains his alignment, Intelligence, Wisdom, Charisma, and immunity to being charmed and frightened. He otherwise uses the possessed target’s statistic, but doesn’t gain access to the target’s knowledge, class features, or proficiencies. The possession lasts until the body drops to 0 hit points, or Aldronard ends it as a bonus action, or Aldronard is turned or forced out by an effect like the dispel evil and good spell. When the possession ends, Aldronard reappears in an unoccupied space within 5 feet of the body. The target is immune to Aldronard’s Possession for 24 hours after succeeding on the saving throw or after the possession ends. 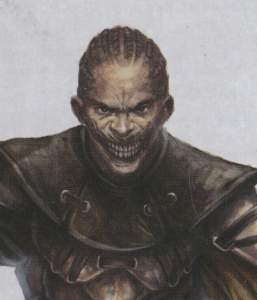 Medium humanoid (human), chaotic evil
Armor Class 14 (hide armor)
Hit Points 45 (6d8+ 18)
Speed 30 ft. STR 16 (+3) DEX 15 (+2) CON 16 (+3) INT 8 (-1) WIS 12 (+1) CHA 10 (+0)
Saving Throws: Str +6, Con +6
Skills: Intimidation +5, Perception +4
Senses passive Perception 14
Languages: Common, Hallit
Challenge 3 (700 XP)
Action Surge (Recharges after a Short Rest). On Ewhar “Hatchet-Hand” Vress’ turn, he can take on additional action on top of his regular actions.
Improved Critical. Ewhar “Hatchet-Hand” Vress scores a critical hit with weapon attacks on a 19 or 20.
ACTIONS
Multiattack. Ewhar “Hatchet-Hand” Vress makes two attacks with his handaxes or gas grenades.
Handaxe Melee or Ranged Weapon Attack: +6 to hit, reach 5 ft. or range 20/60, one target. Hit: 7 (1d6+3) slashing damage.
Gas Grenades Ewhar “Hatchet-Hand” Vress can throw a Gas Grenade at a point up to 60 feet away. One round after the Gas Grenade lands, it emits a cloud of smoke that creatures a heavily obscured area in a 20-foot radius. A moderate wind (at least 10 miles per hour) disperses the smoke in 4 rounds; a strong wind (20 or more miles per hour) disperses it in 1 round. Any creatures who enter or begin their turn in the cloud must succeed in a DC 13 Constitution saving throw or suffer the effect of a stinking cloud spell.
Bandit Leader (Recharges after a Short or Long Rest). For 1 minute, Ewhar “Hatchet-Hand” Vress can utter a special command or warning whenever a nonhostile creature that it can see within 30 feet of it makes an attack roll or a saving throw. The creature can add a d4 to its roll provided it can hear and understand Ewhar “Hatchet-Hand” Vress. A creature can benefit from only one Leadership die at a time. This effect ends if Ewhar “Hatchet-Hand” Vress is incapacitated.

SMILER
Medium humanoid (human), neutral evil
Armor Class 14 (leather)
Hit Points 27 (6d8)
Speed 30 ft.
STR 10 (+0) DEX 16 (+3) CON 10 (+0) INT 12 (+1) WIS 14 (+2) CHA 8 (-1)
Skills: Intimidation +3, Perception +1, Stealth +3
Senses passive Perception 15
Languages: Common, Hallit, Orc
Challenge 1 (200 XP)
Cunning Action. On each of his turns, the Smiler can use a bonus action to take the Dash, Disengage, or Hide action.
Deadeye (Recharge 6). The Smiler can avoid suffering disadvantage on an attack roll when he attacks a target beyond normal range with a firearm.
Gunslinger Dodge (Recharge 6). When the Smiler is hit by an attack, he can use his reaction to force the attacker to reroll its attack roll and take the lower of the two results.
Sneak Attack (1/Turn). The Smiler deals an extra 7 (2d6) damage when it hits a target with a weapon attack and has advantage on the attack roll, or when the target is within 5 feet of an ally of the Smiler that isn’t incapacitated and the Smiler doesn’t have disadvantage on the attack roll.
ACTIONS
Multiattack. The Smiler makes two melee attacks
Dagger Melee or Ranged Weapon Attack: +5 to hit, reach 5 ft. or range 20/60, one target. Hit: 5 (1d4+3) piercing damage.
Pistol Ranged Weapon Attack: +5 to hit, range 30/90, one target. Hit: 9 (1d10+3) piercing damage, Ammunition, Loading, Misfire.

DUNGEON MUSER’S NOTES
As with the earlier rounds of Iron Gods conversions, I tried to start with an existing 5E monster (taken from the Monster Manual, one of the Tyranny of Dragons adventures, or the Princes of the Apocalypse adventure) and then used the rules for creating monsters out of the Dungeon Master’s Guide to modify them. For this round of conversions, I also got to use some of the rules I wrote for the D&D 5th Edition version of the Gunslinger class, which you can find here. There isn’t much else that is particularly novel from this week’s conversions